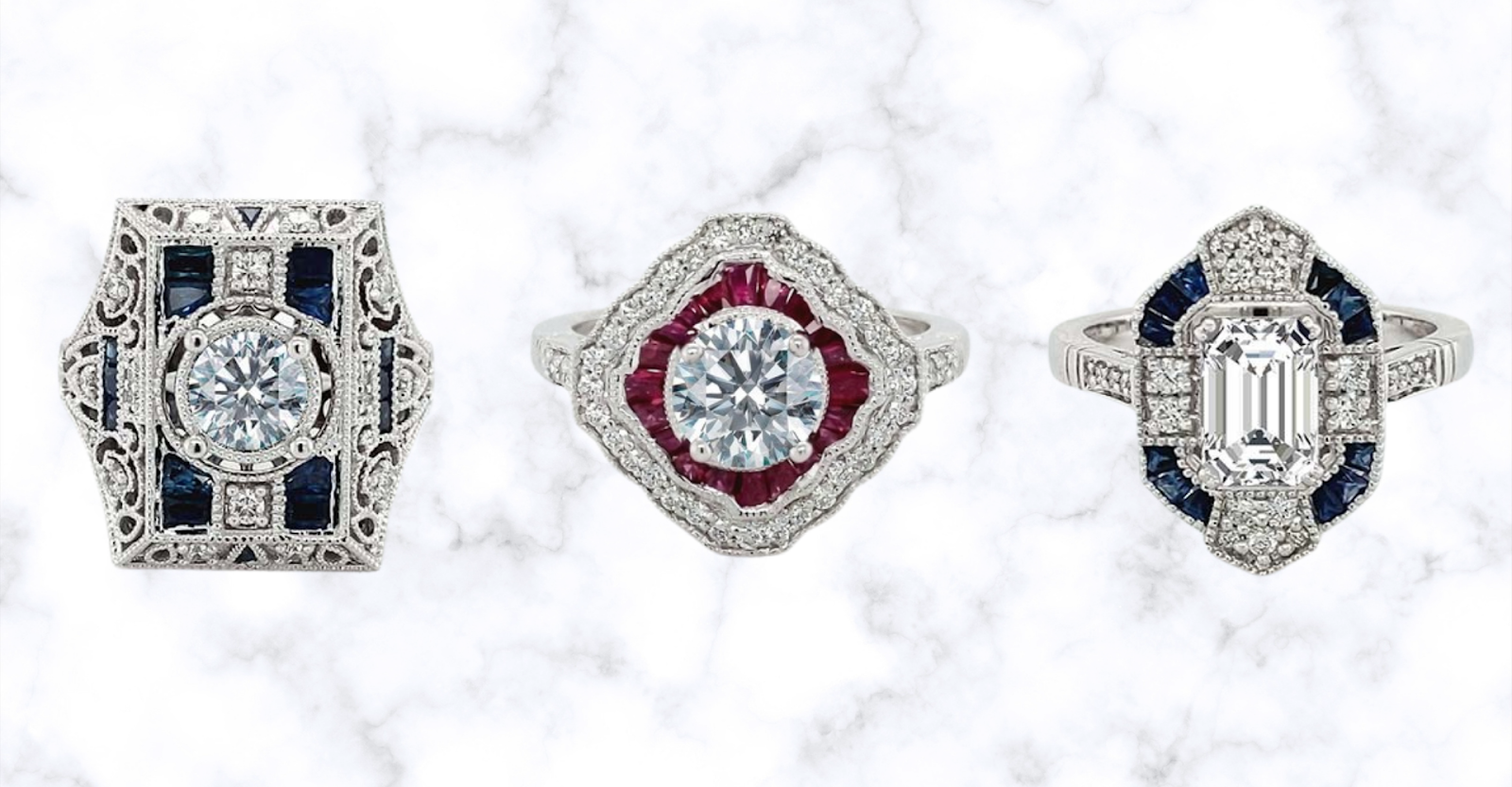 Vintage has made a huge comeback in recent years. From retro clothes to antique jewelry, more and more people are shopping for things they feel are authentic. This is especially the case with engagement rings. With its timeless yet unique style, it’s no surprise that Art Deco rings have become an increasingly popular choice for future brides. In this article, you’ll learn a bit about what Art Deco jewelry actually is, and how to identify the different styles so you can make it your own.

What is Art Deco in Jewelry?

Art Deco is a style that originated in 1925 as a result of the eye-catching display at the Paris World's Fair. In fact, “Art Deco” is actually an abbreviation for the exhibition: Internationale Exposition des Arts Décoratifs et Industriels Modernes, or International Exposition of Modern Industrial and Decorative Arts, in English.

Some of these design aspects left such an impression, they became a staple and timeless trend in a range of industries like cars, fashion, architecture, and of course, jewelry. Genuine vintage jewelry was created between 1920 and 1935. Through the late 1930s, the jewelry styles remained fashionable and have eventually resurfaced as one of the most popular antique jewelry types.

All Art Deco jewelry exhibits at least one trait, if not all, of a specific set of characteristics. In this article, we’ll teach you how to identify authentic Art Deco jewelry and provide tips on how you can make it your own.

Believe it or not, yellow gold has not always been as popular in the mainstream as it is now. The dramatic styles of Art Deco jewelry were created in platinum's brilliant white. However, platinum is extremely rare and expensive. As a result, white gold was born. It was created to combat the rising expense of platinum, while also satisfying the growing demand for white metal. Though both are light metals, they both bring their own unique flair to the ring’s design.

Unless the original design has been altered, genuine Art Deco jewelry will not contain the round brilliant diamonds that we see in the present day. Instead, you’ll find beautiful antique cut diamonds in its place: The most significant of which is the Old European Cut diamond. ​Other beautiful vintage diamond cuts commonly used in Art Deco style rings are the transitional cut, the antique cushion cut, and the Asscher cut. 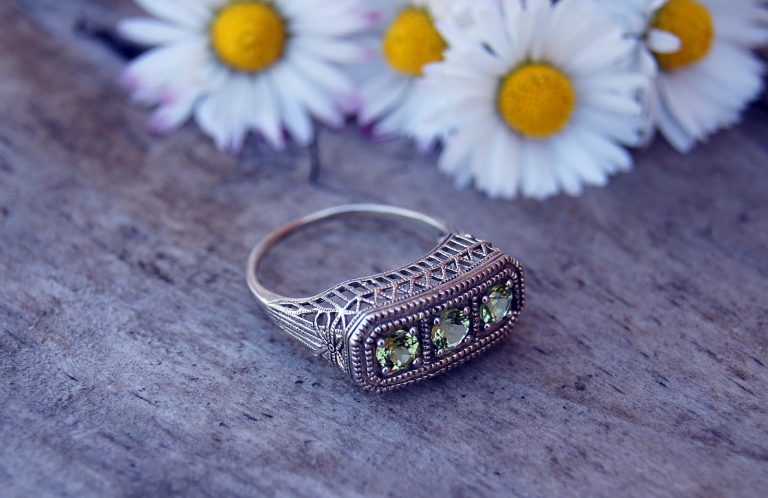 Art Deco-inspired jewelry is all about crisp lines, geometric shapes, and brightness. The design ushered in a new era, known today as the Roaring ‘20s. This turn of the century led to a rebellion of sorts against established traditions and an embrace of a new style that set it apart from decades past. This translated into the Art Deco design, which embraces a more vibrant design than its predecessor, the Edwardian era. Many people confuse the two eras of style when they first start shopping because they are pretty similar. One way to help you differentiate: Edwardian-era rings typically use smaller diamonds to accent a pattern, while Art Deco uses more colored gems.

Filigree work is characterized by tiny, complex cut-outs, which is something we still see today, but is rarely executed as well as it was during the Art Deco era. By the late 1920s, filigree in jewelry had been refined through the use of die-cast machines, and it was widely accessible by the early 1930s. These pieces have a variety of synthetic stones in addition to diamonds, platinum, and white gold. Today, it is incredibly difficult to duplicate the crisp, precise filigree work of the 1920s, as the majority of rings are created using wax molds.

In addition to the trend of strong, geometric lines came an increase in the popularity of the bezel setting. Bezels, which had previously been abandoned in favor of the higher-set and lighter-metal prong form, made a comeback in Art Deco, frequently framing a step-cut diamond with a thin line of brilliance. Today's current bezel settings may evoke this look, but they are done so much lighter.

How to Wear Art Deco Jewelry 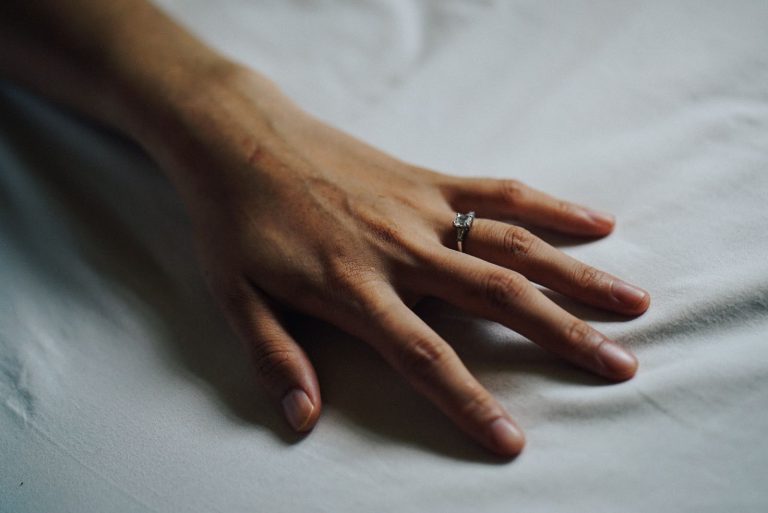 The thing about having an Art Deco engagement ring or another form of jewelry you’ll wear every day is that they’re effortlessly chic. This means it will complement your attire whether you’re dressed up or down. A common misconception is that this type of jewelry ties you down and forces you to stick with one specific style, which just isn’t the case.

More specifically, some brides find an Art Deco engagement ring they fall in love with but are hesitant to go through with it because they fear they won’t be able to find a wedding band to match. Or, they’re afraid they’re choosing a ring based on the current trend of vintage being back in style, and worry that they may not like it as much later on. However, all of these concerns can actually be addressed and resolved fairly easily.

Finding a wedding band to match your Art Deco engagement ring will require some thought, but that doesn’t necessarily mean it’s an unenjoyable process. You’ll get to experiment with a few different styles and combinations of traditional versus nontraditional until you find the wedding band to complete your set of rings that will be totally unique to you. As for worrying about purchasing something based on a trend, remember that these rings have been popular for a century for a reason. They have a truly timeless design that will continue to outlast fads, which makes Art Deco-styled engagement rings much more than a trend.

Like any genuine antique, purchasing the original is no small feat - or price tag. Authentic Art Deco engagement rings are usually passed down as family heirlooms or are otherwise a pretty rare find. However, an engagement ring doesn’t have to be made in the 1920s in order to capture the timelessly chic Art Deco style. Our high-end custom designs are made from the finest materials to ensure you get the high quality of high fashion without the ridiculously high price tag. Be sure to browse our Art Deco Bridal Rings collection today!